I’ve not photographed recently, so today’s blog shows many days of painting. 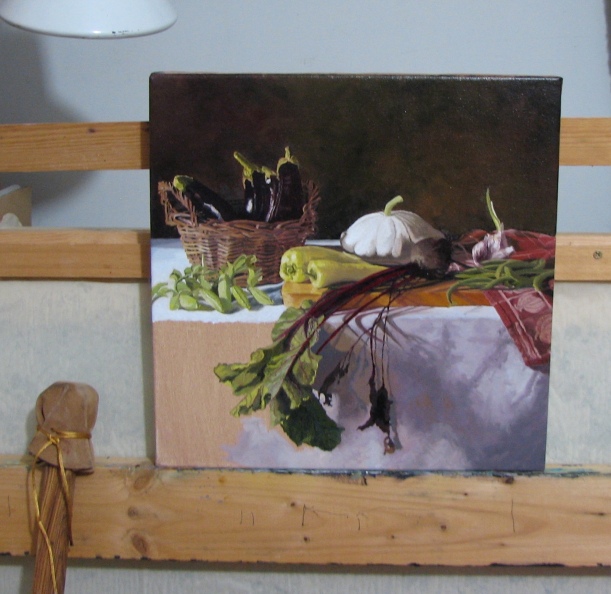 I’ve begun the bottom cloth, and am mostly using a #8 filbert brush. I still resort to my small brush for edges and the like. There’s still a lot to do – shadows need deepening in places etc., but I can see that I’m nearing the end.

Here’s my color checker laminate to date. I still also use my color checker that I built according to Mark Carder’s design at DrawMixPaint. I find the plastic sometimes is too reflective to give me a good view.

I’m getting better and better at mixing the correct color and value without having to use the checker.

I expect to finish this this week. While I finish this up I will be thinking of what I will paint next. Usually by this time I would have settled on a subject, and even done the setting up and photographing. Even preparing the canvas. I like to be able to go straight into a new painting without having to do all the prep work. But that won’t happen this time. There’s too much going on this time of year to fit everything I want to do into the time I have.

I’m getting up these days full of energy only to bog down when it’s time to paint. But I tell myself that if I just sit down and start painting I’ll find myself engaged. So even though I don’t paint for long stretches at a time, I’m slowly making progress. 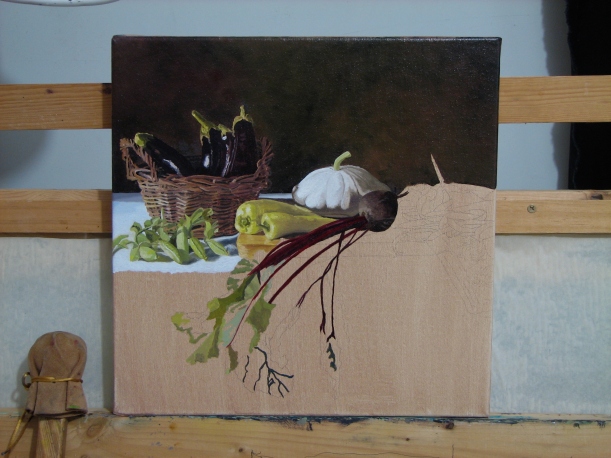 I know I’ll have to darken many of the shadows, but I’ve moved on to mapping out the darks and lights of the beet leaves. The more I get on the canvas, the more I can see where adjustments have to be made.

I think the most important thing for me in painting is liking the image. I will occasionally sketch in a whole canvas only to decide I don’t like the subject. With this image I sat with it a long time, even painting a different image, before deciding I really liked this one. I have made a change to the background as it is all black in the photo. I will decide after it’s nearly done whether I’ll leave it this way or choose the deep contrast pitch black. I seem to do so many paintings with black, that I thought it was time for a change.

I’m posting today so you can see how much (or little) I can do in a day. 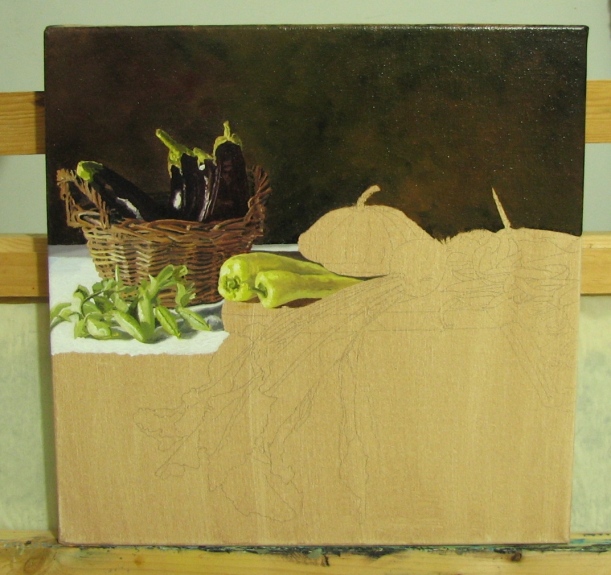 I can see where I need to fix the values.

I painted most of the day, and this is all I have to show for it. I honestly don’t know what others do, but since many do a painting a day, I think I must be a very slow painter.

One of the useful things about photographing as you go, is it is sometimes easier to see on the computer where you’ve got the tone or values wrong. I can see here that the value at the bottom of the lower pepper is way off. I’ll fix that in my next session. This is easy to do since the paint I use is slow drying.

I did do some touching up on the basket, but I’m still not totally satisfied with it.

Here’s the piece of lamination I’m using for this painting. 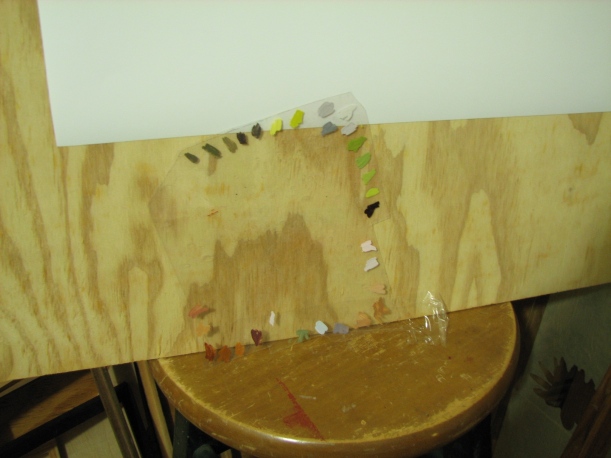 Laminating plastic with my color splotches.

This is a remnant from a laminating machine. You can easily get pieces of this from a place that laminates. I happen to work at a place that does this, but any laminating shop will give you the pieces that get cut off after putting something through the machine. This is a nice stiff clear piece of plastic, and I find it easier to color match this way than to laminate my whole photo (expensive), and dab paint on it. That method requires wiping off which is a waste of time.

I’m back painting again after a forced hiatus due to food poisoning. A week or so ago I was just finishing off a tub of humus when I came upon a posting about a humus recall. “What!!” I said, as I scooped the last bit from the tub with my finger. Turns out the humus I’d just finished was on the recall list due to a possible listeria contamination.

I was consoled when I read the symptoms and found that the dizziness I’d been experiencing was a symptom of listeriosis and probably not a heart attack or a stoke, but I was dismayed that much of the next week that I had off from work was spent in bed – not really sick, but tired and unmotivated to do anything.

Today I emerged from my hazy condition and began painting again. 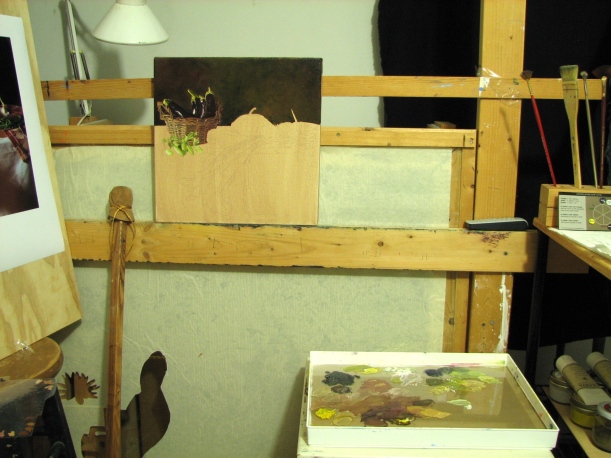 Back painting. See my disorganized palette?

If you look to the far right, on the shelf beside my palette, you can see several tubes of Geneva brand oil paints. As mentioned, I am a devotee of drawmixpaint. Several years ago they came out with a brand of oil paints which are not mixed with toxic chemicals. You can read all about them on their website. After having a cold for months which I could not seem to shake, I began to wonder if it was brought on by my painting during the winter in my tiny unventilated studio.

I invested in the Geneva paints, and have never gone back to my old paints, except for the rare occasions when I need a turquoise or a color that just can’t be mixed from the Geneva limited palette. I have not had any health issues attributable to painting since, and in winter I have no ventilation except for the open door to the rest of the house.

I also find that the paints suit the way I paint. I don’t add anything to them – just use them as they come out of the jar (earliest packaging) or tube.

You might think I have a vested interest in talking up the paints, but I don’t. I just want to share my experience in the off chance it will be useful to someone else.

Notice how messy my palette is? I didn’t learn that from drawmixpaint. It’s my self taught method. Hey – if it works, don’t fix it! 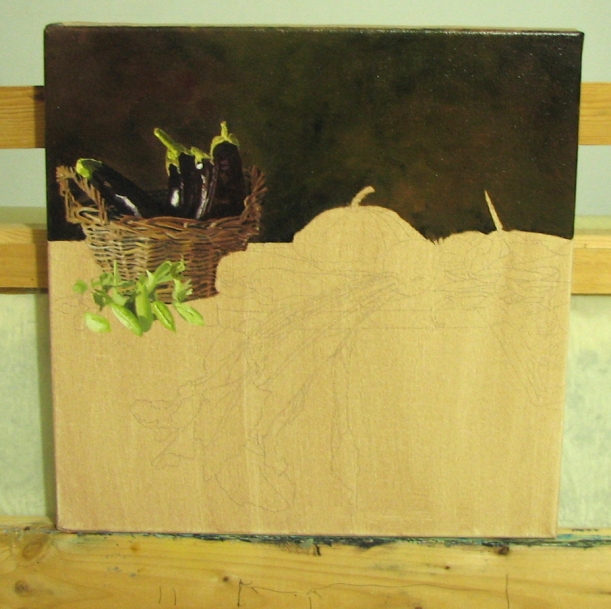 Here’s a close up of progress so far. There’s still work to do on that basket – not quite right yet. This is a still life of one day’s harvest from my garden this summer.