I’d forgotten all about this page until I received notification today of a new follower. And I noticed when I logged in that I actually have traffic. Amazing since my last post was in 2018!

I’ve made puzzles for over 35 years, but not sold on eBay for a while since the market tanked years ago. But I had a dream some months ago that I’d made a puzzle by painting on wood and cutting it up (sacrilege!). Most of what I have done by way of art has come to me in dreams. So I leapt out of bed with my creative mind buzzing.

Obviously oil painting wasn’t going to work, so I dug out my acrylics and made my first paining-on-wood jigsaw puzzle. (Here’s a photo of it.)

It sold instantly. So I went on and made more.

This week I combined the two. I designed a double-sided, stained puzzle, and then painted it. here’s the result. It’s out on eBay now as an auction item. I wanted it to be out there during the Puzzle Parley gathering so the attendees would have something to look at. I’ll admit, I sort of hate selling it.

If you want to bid, you can find me on eBay as JEBinNH (or jebinnh).

Last night I awoke at 2: am. It’s not unusual for me to awaken and read for an hour or so and then go back to sleep. But last night I felt completely ready to get up. I kept thinking about painting – testing the waters to see if I really was ready to start the day. In the end, I took my new puppy out and then read. I turned out the light around 3:00 and lay there thinking about getting up. And though I did not feel as if I’d fallen asleep, when I next looked at my watch it was 5:00. YAY! I can get up. So silly to be ruled by the clock and conditioned habits. But I did not want to end up being too tired to paint.

Once the cats, dog, and chickens, and I were fed, I headed into my workroom – so happy to be painting again.

I spent almost the whole day on the brussel sprouts and basket. I do take breaks, but not many today – two short and one decent length to get out with the dog while we have a warming spell here in New Hampshire.

These sprouts were a challenge. They looked so bad while I was painting them – up close, just random blotches of color. But now that they are pretty much done, I think the magic works pretty well.

The color in the photo is a bit off, and I have to take the shot at an angle due to glare. But…you get the idea.

I can breath again. I’m pretty sure I’ll need to tone this down, but aside from touch ups, I think I’ve got the greenery well enough to progress to the rest of the painting. I’m not sure if I like this, but I can’t think of any other way I could paint this greenery without making a total mess of it.

With respect to loose painting, a commenter remarked that she had loosened up with by completing a 30 paintings in 30 days challenge.

I might just try that. It would be interesting to see the results. Probably nothing I will feel comfortable posting here LOL!

You can see how slow a painter I am. Here it is a week later and this is how little I have managed to do. I don’t paint hours at a stretch. I have to get up and stretch and even go out for a bit of gardening every 20 minutes or so which accounts, I suppose, for the slow-going. But I’m comfortable with how it’s coming along and still love the magic of it all.

I’ve finished the painting. I’m calling it Fall Day’s Harvest. I sat with it for a while on Saturday, making tiny adjustments here and there, and then on Sunday morning I signed it. It’s done. I did decide in the end that I liked the background as it was.

It will be weeks before it’s dry and ready to varnish.

This is photographed at a slight angle to remove the glare from the overhead light. It measures 14″ x 14″. It took me a while to warm up to this photograph, but now I think this is one of my favorite paintings.

What to do next – that is the question.

I’ve not photographed recently, so today’s blog shows many days of painting. 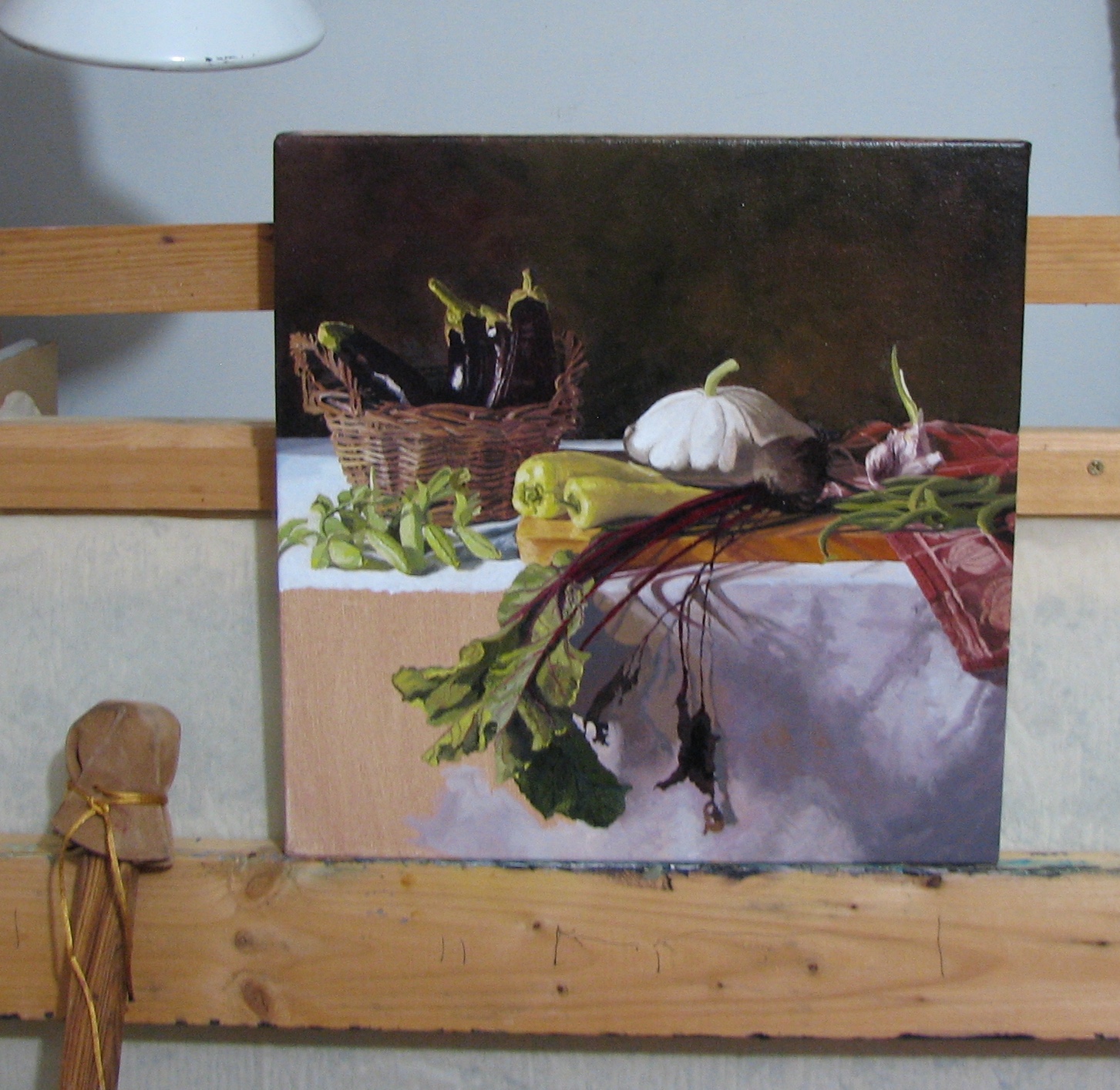 I’ve begun the bottom cloth, and am mostly using a #8 filbert brush. I still resort to my small brush for edges and the like. There’s still a lot to do – shadows need deepening in places etc., but I can see that I’m nearing the end.

Here’s my color checker laminate to date. I still also use my color checker that I built according to Mark Carder’s design at DrawMixPaint. I find the plastic sometimes is too reflective to give me a good view.

I’m getting better and better at mixing the correct color and value without having to use the checker.

I expect to finish this this week. While I finish this up I will be thinking of what I will paint next. Usually by this time I would have settled on a subject, and even done the setting up and photographing. Even preparing the canvas. I like to be able to go straight into a new painting without having to do all the prep work. But that won’t happen this time. There’s too much going on this time of year to fit everything I want to do into the time I have.

It is hard to believe I started (and stopped) this blog over four years ago. The good news is, I didn’t stop painting. Life did get very busy, however. I got real job (starving artist and all that). Working six days a week made it very difficult to get into the creative mood. But with a change in schedule a year ago that allowed me three full days off a week, I found I could settle into painting on a regular schedule. Since then I have done little else in my free time, but paint. Oil painting. I made a resolution for 2016 that I would concentrate on and master (to my liking), oil painting.

My first painting for 2016 won third prize out of 196 entries in May 2015 on renoartio.com. This gave me a good boost to keep going. Since then I’ve finished seven other paintings and am on number eight.

I’m working on a website which I hope to have soon.

This is the award winner.

This was painted from a photograph I took of the pond nearby. I had been dreaming about painting this for a number of years. I’m so happy I finally tackled this one.

I have been working on an oil painting pretty much every day for weeks now. Prior to starting this project, I moved all my oil painting equipment out to the playhouse. I call it a playhouse because when I first moved up here, I converted the workshop outbuilding into a playhouse within a playhouse for my then young grandchildren. They are grown now, and the two little ones are not up here often enough to warrant leaving the space idle.

I pretty much just put my stuff where I could, and got cracking. The Light Box is out-of-the-way at the moment but will need a better spot for ease in moving the light above.

After building my Carder shadow box, I realized that it took up far too much room in my workroom, making working on other projects, if not impossible, uncomfortable. Also, the ventilation in the small workroom was not good for working with oils.

So I moved the shadow box, lamps, and paints out to the playhouse which had become a bit of a storage area. Then I mixed my paints according to the two Carder medium recipes, and began a painting from a photograph I’d taken of my father’s mud room in Scotland.

Paints are mixed and I’ve begun the painting. There’s a printout of the photo I’m painting, up on the wall. I began by painting all the negative spaces. That’s the DrawMixpaint website up on the computer – that’s just for the photo. If I use the computer when I paint, it’s to listen to an audio book.

I found that my paints for the most part, did stay viable for the many weeks I worked on the painting. Only once did I have to scrape the pallet and remix my greens.

Here’s the finished piece. I’m pretty happy with it.